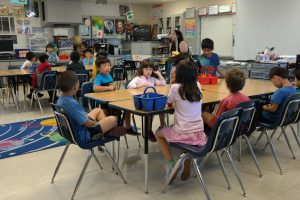 Students in the Immersion Program will:

• Develop fluency and literacy in Mandarin and English

• Achieve proficiency in all academic subjects, meeting or exceeding state and district standards

• Cultivate an understanding and appreciation of other cultures, and develop positive attitudes towards fellow students, their families, and their community

Our program at a glance

For the 2019/2020 school year, we have 14 classes; 2 each for grades kindergarten through sixth grade at Azevada Elementary School. Additionally, there are 2 seventh and 1 eighth grade class at Hopkins Jr. High School. We also have 17 students enrolled in the 9th grade at Mission San Jose High School. In total, there are about 400 children in the program now. According to the latest survey of parents representing 69% of the children in the program, 73% of the families speak English, 15% speak Mandarin, and 9% speak Cantonese as primary languages at home. 59% of the families surveyed also speak a second language in the home at least 10% of the time. Other languages spoken either as the primary or secondary language at home include English, Mandarin, Cantonese, Spanish, Taiwanese, Burmese, Vietnamese, Japanese, Gujarati, and American Sign Language.

What is Chinese Immersion?

Immersion education is an alternative educational model designed to provide students with fluency and literacy in two languages. In this program all students develop literacy in Mandarin first with the gradual addition of English.

The language immersion approach is a proven, effective method in providing children with a well-rounded, academically excellent education and full mastery of both English and any target language.  Several Bay Area public and private schools, including schools in Palo Alto, Cupertino, Berkeley, Los Altos, Hayward, and San Francisco, have reported phenomenal academic success in Chinese Immersion programs (CIP) and more and more are being established across the nation.

Why is immersion an effective second language model?

A great deal of research has centered on foreign language acquisition in various school settings. Over the past thirty years, due in large part to the success of immersion programs, there has been a shift away from teaching language in isolation and toward integrating language and content. This shift is based on four principles:

Is Mandarin Immersion Right for Your Child?

• Do you value bilingualism, bi-literacy, and diversity?

• Does your child need challenges?

• Do you want your child to have a linguistic edge in tomorrow’s global market economy?

• Are you willing to make a long-term commitment to the Immersion Program?